During April the Artist in Residence of Træna, is hosting the social designer Esli Tapilatu from Groningen in The Netherlands. Esli is the brain behind the international project >> Capital of Happiness<< and he has been around on Træna asking a lot of questions to the people. Happily, we now got the chance to ask Esli some questions  before he leaves the island. Read the interview below. And stay happy 🙂

First of all, what is Capital of Happiness?

-It is a non-profit, ‘good news’ project where stories from different people and cultures around the world are collected. Capital of Happiness consists out of several projects, all with one goal, connecting people and cultures threw creativity and storytelling. COH releases positive posters worldwide (with the help of our friends all over the globe), also we release the ongoing photography project 27 Shots | changing perspectives and in the end of 2016  the first edition of the Capital of Happiness ‘good news paper’ will be released. A printed and online news paper, full of stories about happiness worldwide. So far we’ve collected more than 250 good stories from all over the world, and since april Træna is one of the contributors.

So what have you done here at Træna, Esli?

-First of all I would like to mention why I initiated this project. In a time of tribulation, and a constant flow of incentives and a absence of positivity in the news I think it’s important to show that there still is some much good going on around the world. The beauty of the small enjoyments. With Capital of Happiness I create a stage for ‘good news’, I activate people to tell, write, draw, sing – capture – their story in the way that suits them best. Cause I believe everyone has a story tell. A story worth ‘listening’ to.

Answering your question – What have I done in Traena – The first word that comes in mind is that I enjoyed. The friendly people. The meaningful conversations. The mingling. The dinners with local community. The sunsets. The beauty of Creation. The Eagles soaring (no you don’t need a television on this island). The playing basketball with the local youth. Climbing mountains. The silence, facilitating the soul to speak. It is the connecting with people (and myself) that makes the project so meaningful.

How was the people of Træna involved?

-The main focus of my stay on Traena was the ongoing photography project 27 Shots changing perspectives. In this edition of the project I gave 10 locals a disposable camera with a list with 27 questions. Each question had to be answered in a photo. Questions like: ‘What makes you happy?

Who is the wisest person on the island? What is your biggest loss? What is your dream? ‘ and so on. I advised them to carefully answer the questions first before to capture it on photo. A moment of reflection. Awareness. Concentration. The beauty of this edition of the project is that it’s in such a small community, everyone knows about it, talks about it, so its easier to notice the ‘effect’ of the project. Capital of Happiness, has four key words – connect, create, awake, aware. I believe that the project ‘pushed buttons’, in a good way. And that makes me happy.

Lilly Love was one of the locals participating in Træna. (Photo: Esli Tapilatu)

We’ve also seen some pink posters around, was that part of the project?

-Yes. Besides 27 Shots | Changing perspectives I released several posters posters on the island. Posters that already been released from Tokyo to Sao Paulo, from Vilnius to Reykjavik, from Paris to London, from Oslo to Delhi, from Adis Abebba to Cape town. And now here, on beautiful Traena.

While being here on Husoya, a new poster was born. I captured portraits of the local people and asked what made them happy and combined this in a poster. Between all these project movements I created three new artworks and prepared a special 27 shots | Changing perspectives – refugee edition and started preparations to do the 27 Shots project in Newark New Jersey, with 300 students in one of the roughest and toughest areas in the USA.

What happens with the project now?

-A big part of the impact of the project is to show the result of the photos to the local community. Then the connecting starts even more, people will talk, ask, relate, confirm, discuss, speak, dislike and love. The truth is that I am still searching for the right context to have the most positive impact. At the moment I am thinking of creating a small Traena good news paper, consisting the photo’s of the participants, this edition could be freely spread amongst the local community. Also ‘we’ have been talking about a exhibition during the Traenafestivalen, so there is still some work to do, to empower the impact of the project. And we will make that happen.

The next big steps in the Capital of Happiness project are the Refugee and the Newark edition. To make that happen I am applying for fundings and preparing a crowdfunding campaign to connect the right people to project so Capital of Happiness can grow to the next level in quality. And yes, although its not something I am keen talking about, but money is a a vital element connect the right people to this project. One finger is just one, but four fingers and a thumb make a fist 🙂

Do you think Træna is a happy place?

-I believe the beauty of the creation around Traena provides in Happiness, yes. But like there are four seasons on one day on this island, there is space for more then only Happiness. I have seen people enjoying the calm of the island, the peace, the being home.I have also seen loneliness, the wanting to speak but not knowing how, I saw people searching, hiding. We are all human. And people together make and build a community. And what I see and experienced is a beautiful group of people who welcomed me in a warm way,  embracing the project, proud of the place they live in. And so they should.

What about you, have you been happy staying at Træna?

-I truly enjoyed my stay. And I am very happy with the people I met. The conversations shared. To be honest, I was hoping before I came that if I would leave I would miss the people and the island. And there is a big chance I will. The first weekend of my stay, I felt a bit stuck on the island – and I just needed to get off and drive around the mainland. Born and raised in city – the calm was a bit confronting – but in a good way.

What are you going to do now?

-On Sunday I will start my drive back home to The Netherlands in my camper – and enjoy it. Back home I firstly focus on the Refugee & Newark edition and lecturing at the Stenden University. Building, slowly, listening to my heart, knowing the right thing to do, at the right time. And I will find myself a Capital of Happiness ambassador who keeps searching for the good stories on this beautiful island and confirm Traena as a Capital of Happiness. 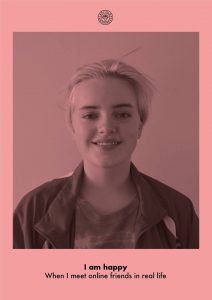 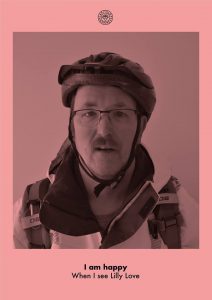 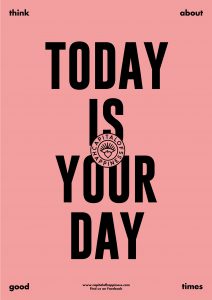 Read more about the artists coming to Træna:  www.tenktraena.no/air
AIR Træna started in 2015 and is run by Tenk Træna  in a collaboration with the municipality, Træna Musem, Trænafestivalen and local partners.
It’s partly finansed by Nordland Fylkeskommue.
Check out application forms and more background info at  www.airtraena.wordpress.com